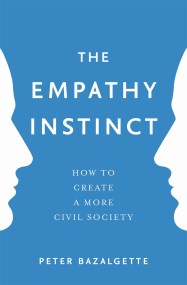 'If we hope to meet the moral test of our times, then I think we're going to have to talk more about the "empathy deficit".…