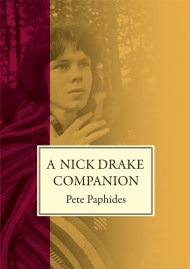 This short book, taken from Remembered For A While, tells the stories and circumstances that surround every known recording in Nick Drake's canon (as well…