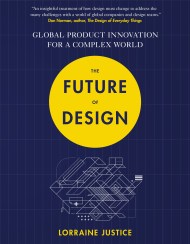 The Future of Design

Creating a successful global product is complex. Why do some products survive or become reinvented? What makes a product loved by some and despised by…