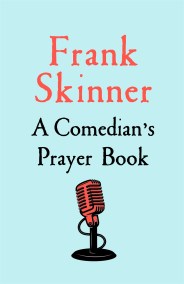 A Comedian's Prayer Book. The title is a worry, isn't it?... God is a tough audience as far as audible response is concerned, but at…