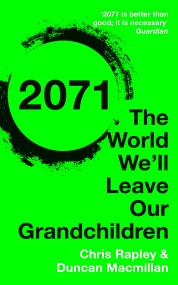 How has the climate changed in the past? How is it changing now? How do we know? And what kind of a future do we…