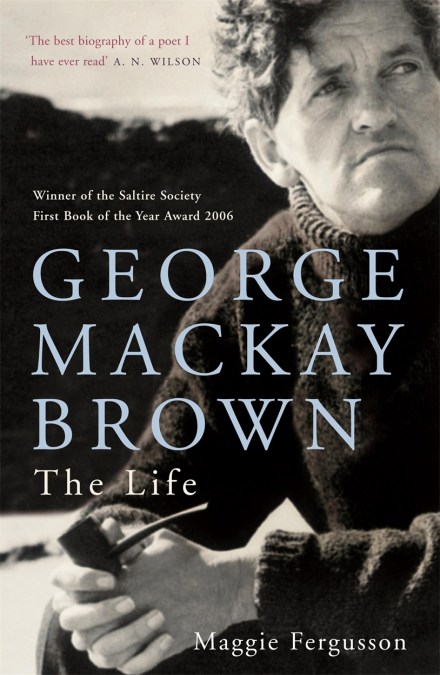 by Maggie Fergusson
George Mackay Brown was one of Scotland’s greatest twentieth-century writers, but in person a bundle of paradoxes. He had a wide international reputation, but hardly left his native Orkney. A prolific poet, admired by such fellow poets as Seamus Heaney, Ted Hughes and Charles Causley, and hailed by the composer Peter Maxwell Davies as ‘the most positive and benign influence ever on my own efforts at creation’, he was also an accomplished novelist (shortlisted for the 1994 Booker Prize for Beside the Ocean of Time) and a master of the short story. When he died in 1996, he left behind an autobiography as deft as it is ultimately uninformative.

‘The lives of artists are as boring and also as uniquely fascinating as any or every other life,’ he claimed. Never a recluse, he appeared open to his friends, but probably revealed more of himself in his voluminous correspondence with strangers. He never married – indeed he once wrote, ‘I have never been in love in my life.’ But some of his most poignant letters and poems were written to Stella Cartwright, ‘the Muse of Rose Street’, the gifted but tragic figure to whom he was once engaged and with whom he kept in touch until the end of her short life.

Maggie Fergusson interviewed George Mackay Brown several times and is the only biographer to whom he, a reluctant subject, gave his blessing. Through his letters and through conversations with his wide acquaintance, she discovers that this particular artist’s life was not only fascinating but vivid, courageous and surprising. 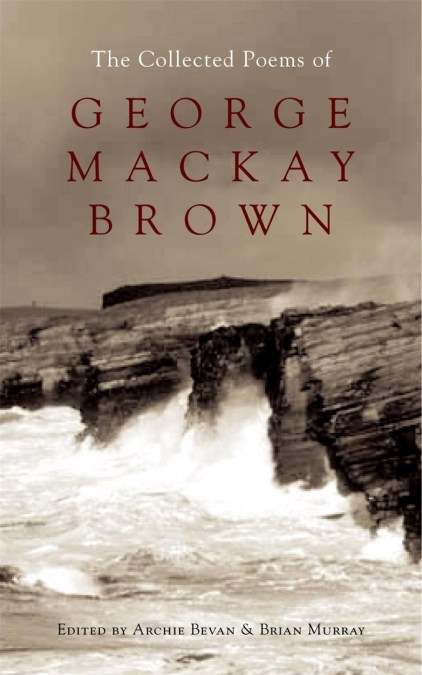 by Brian Murray by Ed. Archie Bevan
George Mackay Brown is recognised as one of Scotland’s greatest twentieth-century lyric poets. His work is integral to the flowering of Scottish literature over the last fifty years. Admired by many fellow poets, including Seamus Heaney and Douglas Dunn, his poems are deeply individual and unmistakable in their setting: ‘the small green world’ of the Orkney Islands where he lived for most of his life with its elemental forces of sea and sky and Norse and Icelandic ancestry, is brought vividly and memorably to life.

Here, his rich resonant poetry is collected in one volume, making available again many poems that are otherwise out of print. 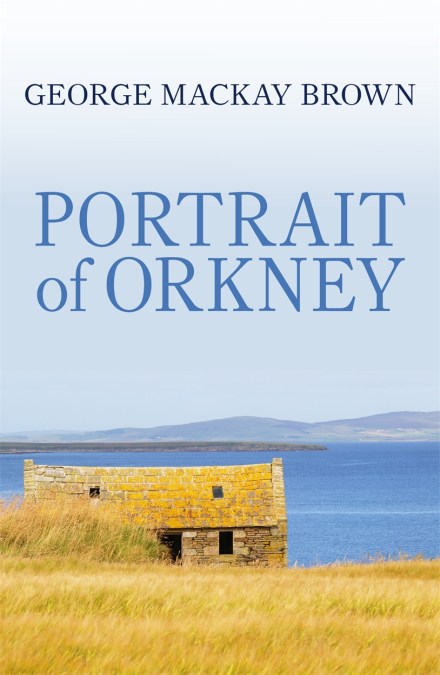 by George Mackay Brown
Portrait of Orkney is a personal account of a people, their history and their way of life, and of a landscape that has shaped them, and been shaped by them. 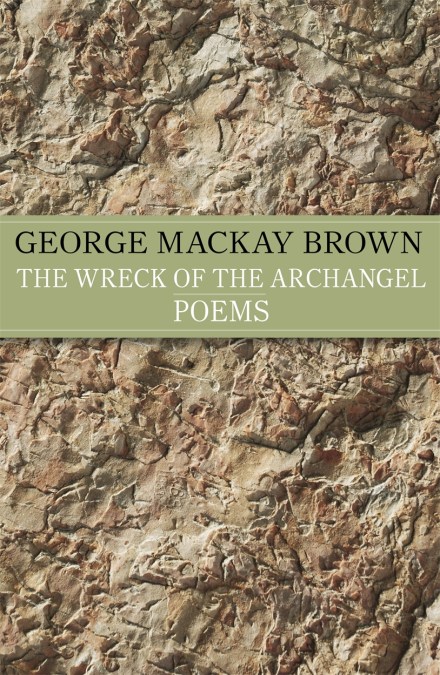 The Wreck of the Archangel

by George Mackay Brown
This collection of the poetry of George Mackay Brown centres on the theme of journeys – including an ill-fated 19th century trip ending off the Orkney island of Westray, from which the book takes its title. 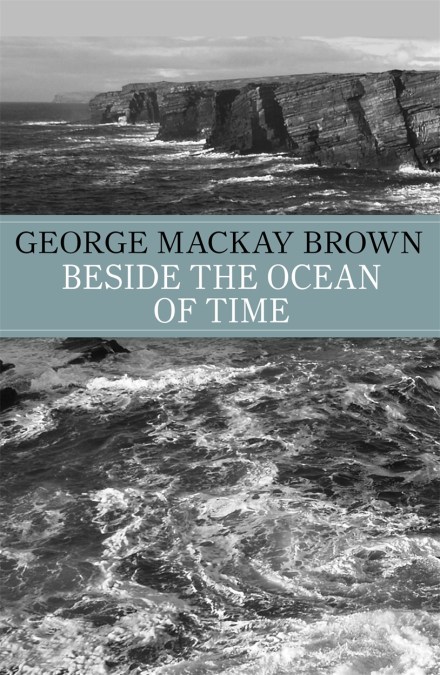 Beside the Ocean of Time

by George Mackay-Brown
In this novel set on the fictitious island of Norday in the Orkneys, George Mackay Brown beckons us into the imaginary world of the young Thorfinn Ragnarson, the son of a crofter. In his day-dreams he relives the history of this island people, travelling back in time to join Viking adventurers at the court of the Byzantine Emperor in Constantinople, then accompanying a Falstaffian knight to the battle of Bannockburn.

Thorfinn wakes to the twentieth century and a community whose way of life, steeped in legend and tradition, has remained unchanged for centuries. But as the boy grows up – and falls in love with a vivacious and mysterious stranger – the transforming effect of modern civilization brings momentous and irreversible changes to the island. During the Second World War Thorfinn finds himself in a German prisoner-of-war camp, and it is here that he discovers his gifts as a writer.

Long afterwards he returns, now a successful novelist, to a deserted and battle-scarred island. Searching for the peace and freedom of mind he had in abundance as a child, he finds instead something he didn’t even know he was looking for.

George Mackay Brown intertwines myth and reality to create a novel of deceptive simplicity. The story of Thorfinn and the island of Norday is a universal and profound one, rooted in the timeless landscape of the Orkneys, the inspiration of all his writing. 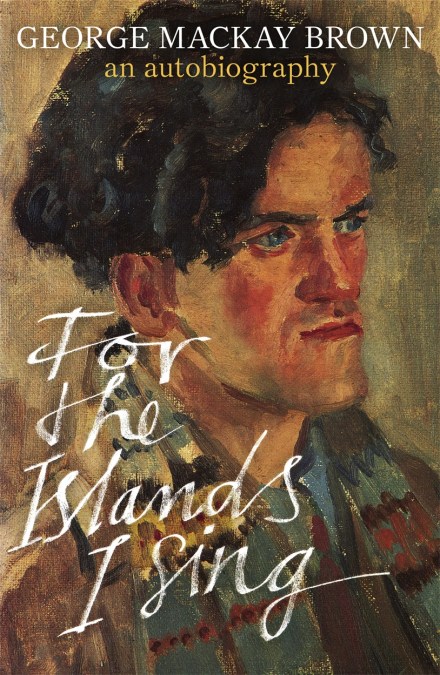 For the Islands I Sing

by George Mackay Brown
George Mackay Brown wrote this memoir in the years before his death in 1996, but he did not want it published while he lived. Here we see the author’s simple, bardic honesty turned on himself.

In particular, he looks at Orkney, where he was born the youngest child in a poor family, and which he rarely left. 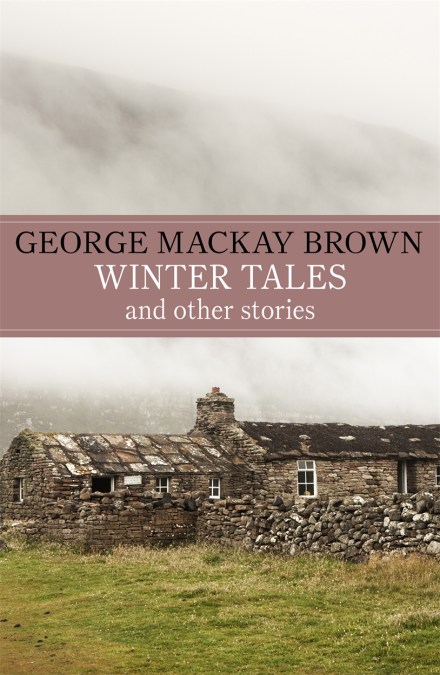 by George Mackay Brown
This collection celebrates winter and its festivals, light and darkness. It includes the tales of Lieutenant William Bligh at the port of Hamnavoe, an Edinburgh man rediscovering his roots in Shetland, Baltic-men shipwrecked on the Orkney coast, and Norse warriors setting out for the Holy Land.

Through these stories George Mackay Brown explores the effects of new ways of thinking and working on the ancient patterns and traditions of Orkney life. 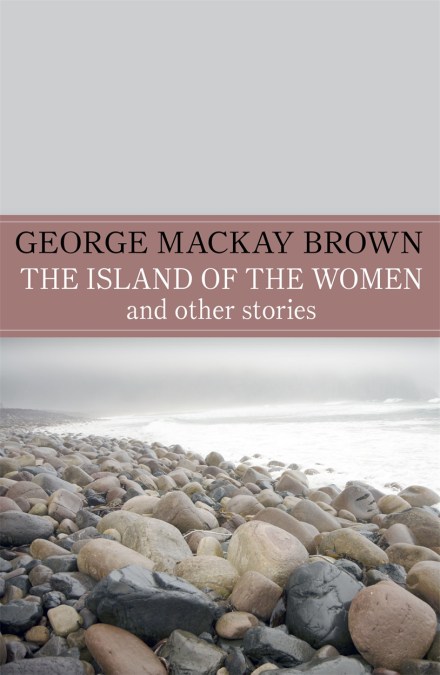 The Island of the Women and Other Stories

by G Mackay Brown by George Mackay Brown
In these six stories George Mackay Brown leads us back along the sweep of Orkney’s past and beyond even that to the remoteness of fable. He reveals the timelessness of the lived moment and the constants of island life in the harvest of sea and land and the compulsions of voyage and homecoming. 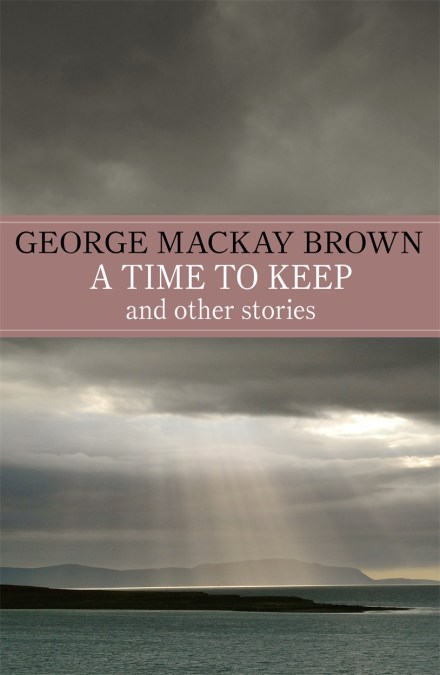 A Time to Keep

The second collection of stories published by George Mackay Brown, this volume includes 12 stories arising from both ancient and modern life on the island of Orkney. 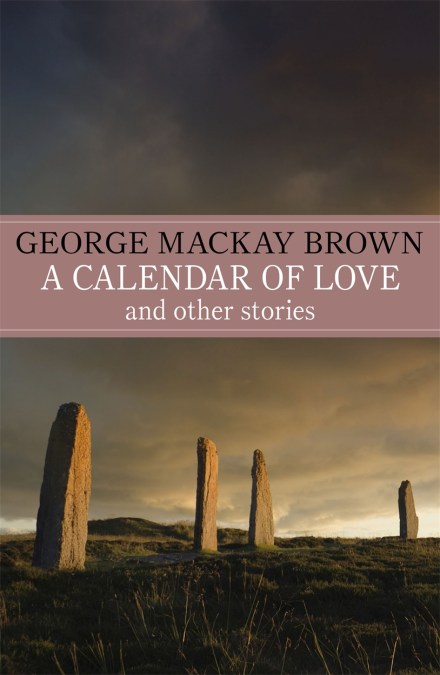 A Calendar of Love

The author’s beloved Orkney is brought vividly to life in this classic collection, peopled with crofters, fishermen, ferrymen and tinkers. History plays a part too, for Norse and Scottish legend are revived in tales of witch trials, priest hunts and Viking raids, all endowed with the stark beauty of George Mackay Brown’s masterful storytelling. 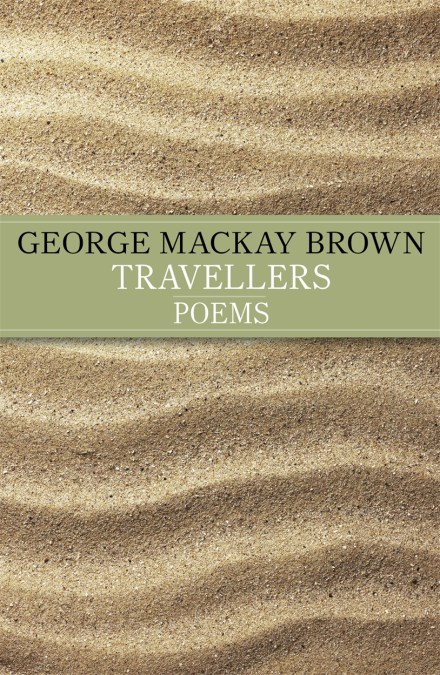 These unknown and sometimes unexpected poems by the Orcadian master have all his characteristic simplicity and power.

In these poems readers will find new ideas previously unexplored, but they will also find those qualities that made George Mackay Brown different from anyone else. 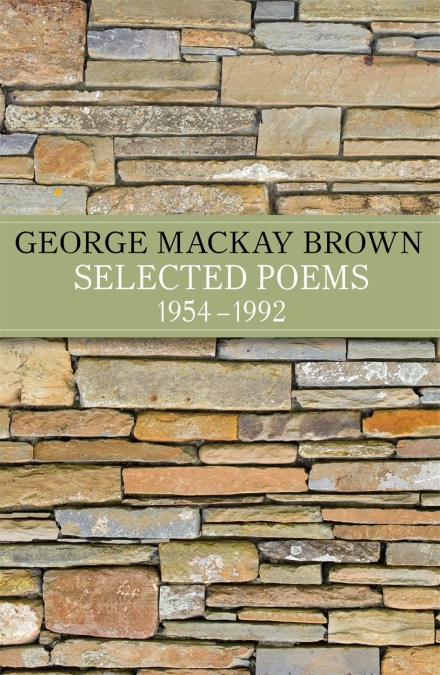 A compilation of poetry written by George Mackay Brown over a 30-year period, which represents his favourite work. These poems reflect the richness of the Orkney Island community where he lives – a community permeated with its past and still close to the natural world. 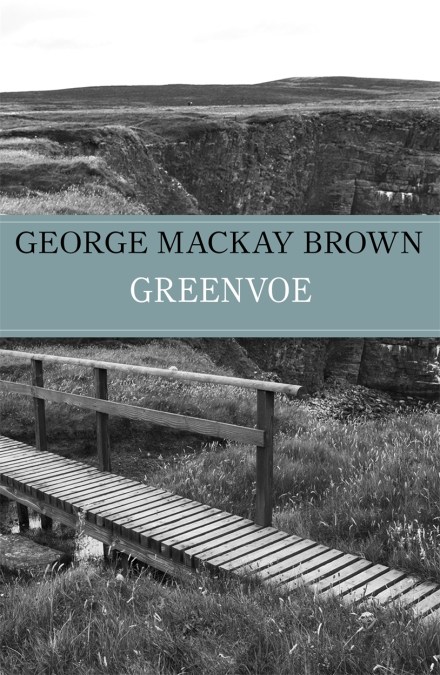 George Mackay Brown’s first novel describes a week in the life of the islanders as the come to terms with the repercussions of Operation Black Star in a masterful mix of prose and poetry from one of Scotland’s greatest writers. 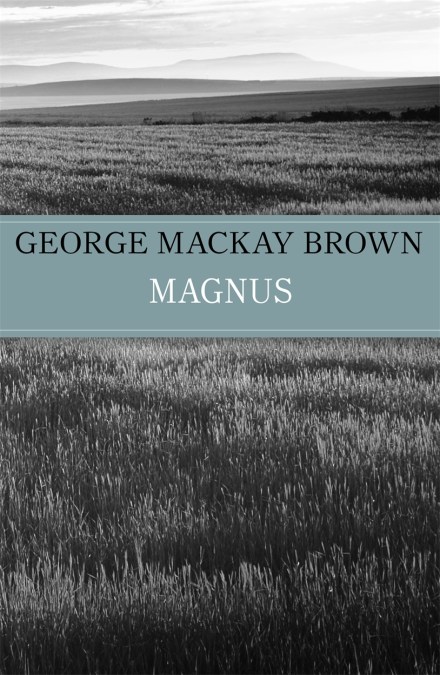 This profound and poetic novel has been described as George Mackay Brown’s most innovative work. He recounts the tale of the murder of the Earl of Orkney in the 12th century and links it to the story of Dietrich Bonhoeffer, a German theologian imprisoned and executed by the Nazis during World War Two. A fascinating meditation on the eternal questions of guilt, goodness and sacrifice from one of Scotland’s greatest writers. 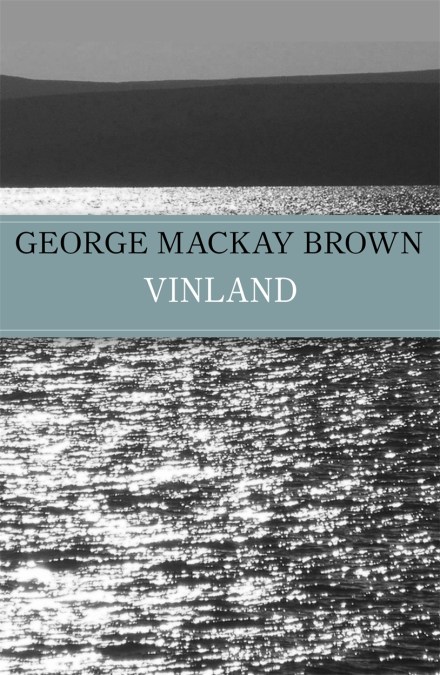 In his fourth novel, George Mackay Brown takes us to an Orkney torn between its Viking past and its Christian future.

Set in the early 11th Century, it tells the story of Ranald Sigmundson, who turns his back on a successful life of political intrigues and battles to design a ship to take him on a journey even greater than the first great voyage of his life, the one to Vinland.